Our roots are in an article published in The Sunday Times at the end of 1995. This article reported a ‘new hope prostate cancer’, based upon the recent publications of our chairman, Prof. Mustafa Djamgoz. Rather surprisingly but gratifyingly, the news led to some spontaneous offers of donations from the public and with the help of Imperial College London a ‘research fund’ (called the “Prostate Cancer Research Fund – PCRF” was established within the College system as an ‘exempt charity’. In 2002, it was registered as an independent charity with Prof. Mustafa Djamgoz, Dr Deborah Prince, Dr Graham Wilkin as trustees and the late Lord Porter OM as Patron. At that time, the charity was renamed as the “Pro Cancer Research Fund” (still PCRF) to reflect the successful expansion of the research onto other cancers. Drs Wilkin and Prince have since retired and have been replaced by Mrs Gonul Mehmet and Professor Christopher Foster. 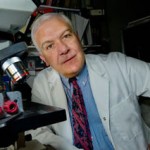 Mustafa Djamgoz is a graduate of Imperial College London (first-class BSc degree in Physics and a PhD in Biophysics). He became Professor of Neurobiology in 1995, and later (2005), Professor of Cancer Biology. He worked on the electrophysiology and synaptic plasticity of the retina for more than 20 years before becoming interested in the pathophysiology of cancer! With his highly unusual scientific background in neuroscience, he has introduced novel techniques aiming at early diagnosis and non-toxic therapy of solid cancers. This work has led to a new vision of the cancer process. His approach is ‘integrated’ and a new drug has reached a pre-clinical stage. Professor Djamgoz has published 5 books, more than 200 primary research papers and has trained more than 30 PhDs. His new book called “BEAT CANCER in Ten Steps” (co-authored with Professor Jane Plant) was published in June, 2014. His scientific consultancies and granting agencies include the Medical Research Council (UK), The Wellcome Trust, Breast Cancer Campaign, Prostate Cancer Charity and Prostate UK. Prof Djamgoz is the recipient of the Huxley Memorial Medal and Japanese Government Research Award for Foreign Specialist. He has served as a Trustee of Breast Cancer Care and as the Chairman of the Science Council of the College of Medicine.

Mrs Mehmet was a practising solicitor for some 15 years when she received a diagnosis of myasthenia gravis, which was to alter her life. She gave up work and was at a very low place, both physically and emotionally. Most days she was struggling to get out of bed and on one of those days she received a phone call from her friend Shensev Moustafa telling her that her help was needed to set up the paperwork for a new project: “The PCRF Orchid Walk”. Initially, she agreed because this was something she could do from home without too much physical demands. However, she soon realised that this was a significant turning point in her life. She met the most incredible group of selfless, charitable and empathetic people who had come together to do something to make a difference in the lives of those effected by cancer. Shortly thereafter, she was invited to join the PCRF Support Group and for some years now has been the Chair of the group. She was appointed a Trustee when Dr Wilkin retired. She is also a volunteer at the PCRF “Your Charity Shop”. She says “My involvement with this organisation has been one of the most rewarding achievements of my life. Most significantly, I am part of what we call the PCRF family that embraces and supports anybody that is affected by cancer in any way or that wishes to help/support the cause.” 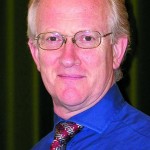 Professor Chris Foster is an internationally-recognised urological pathologist with specialist interests in the molecular pathology of aggressive prostate cancers. He received his BSc in Biochemistry at University College London before qualifying in Medicine at the Westminster Medical School. He trained in the biochemistry and cell biology of cancer completing a PhD at the Institute of Cancer Research and thereafter working at the Children’s Hospital of Philadelphia, USA, including a period of time spent at the National Institutes of Health, Washington, DC. He was awarded a DSc for his contribution to understanding “The Cellular and Molecular Biology of the Metastatic Process”. In addition to publishing original research communications, he is the author of several standard diagnostic pathology texts, including “Pathology of the Prostate”, “Pathology of the Bladder” and “Molecular Oncology of Prostate Cancer”. Presently, Professor Foster’s research is focussed on new prognostic biomarkers identified by gene expression analysis to be applied to the management of individual patients with prostate cancer, and potentially as new therapeutic targets. In 2010, he was invited to present a seminar “From Cancer Biomarkers to Therapeutic Targets – A Stratified Medicines Approach” at the Shanghai Expo and continues to publish in the area of cancer biomarkers. These markers are being examined in a variety of population groups with the objective of assisting both the diagnosis and management of prostate cancer. Currently, Professor Foster is Medial Director of Pathology at HCA International, London. He is a founder member of the Pathology Panel of the Transatlantic Prostate Group and Lead Pathologist for the International Cancer Genome Consortium with a specialist interest in the genomics of aggressive prostate cancer.

Following the registration of PCRF, the number of patients seeking help from the charity kept increasing. A group of volunteers, led by Mrs Aysin Yilmaz, then got together and with the approval of the Trustees formed a “Support Group” with the primary aim of opening a drop-in centre for all those affected by cancer. This was opened in 2003 and named “Amber Care Centre” after one of our volunteers and supporters. The Support Group is semi-autonomous but as an integral part of PCRF it answers to the Trustee Board. Mrs Gonul Mehmet, Chairperson and Trustee is the bridge between the Group and the Trustee Board. Today, the Support Group comprises the following members, all volunteers (in their own words):

Mrs Sheniz Cemal (Treasurer): “I have been a member of the PCRF support group committee since 2003 when it was first formed. I remember like it was yesterday the day my best friend’s husband called and asked me to be treasurer for a one-off function to raise money for cancer research. My friend was Amber Mustafa and it was Naim, her husband, owner of The Regency Function room, who wanted to do an event to raise money for the cancer research being carried out at Imperial College by Professor Mustafa Djamgoz. Amber had been diagnosed with breast cancer and was going through a very difficult time both physically and mentally. She had met the professor and her and Naim were very impressed with his work and wanted to support his research. I was told this would be a one off event and asked if I would be happy to help. Of course I was more than happy to do so. It is now 2015, and I am proud to say that I am still the treasurer for this very worthwhile charity. The support group work to raise money for the research at Imperial College and we also have a care centre, where cancer patients and their families come for support. Sadly my friend Amber died after a long and hard battle, she will always be missed but she will never be forgotten. Our care centre is named ‘The Amber Care Centre’ As a charity group, we have gone from strength to strength. We are like a family working, laughing and crying together. I have made many friends along the way and am so proud to be a part of this charity.”

Mrs Shensev Moustafa: “My daughter has had cancer and I have lost two siblings to the disease. Fourteen words not a hundred is reason for me to carry on fundraising.”

Mr Koray Camgoz: “I began volunteering for PCRF in 2009 shortly after graduating from university. I helped organise the first Palmers Green Festival and a few months later I was invited to join the committee. Following a brief spell living abroad, I rejoined the charity late in 2014 to help improve the organisation’s online presence. I manage the charity’s Facebook account and enjoy contributing ideas to all PCRF projects. PCRF is special to me because it’s a local charity, with a global mission. The cost-free psychological support services offered by the charity have a direct impact on the lives of people living in my local community. Yet the pioneering research conducted by Professor Djamgoz at Imperial College has the potential to deliver tangible improvements to the lives of millions around the world. Away from PCRF, I work for the Chartered Institute of Public Relations where I across earned, owned, shared and paid media platforms to improve professional standards of practice within PR.”

Dr Zehra Yilmaz: “As a teenager, the work carried out by Professor Mustafa Djamgoz and his team fascinated me so I frequently attended their seminars on cancer. During the summer holidays of my Undergraduate studies in biochemistry and physiology, I volunteered to work within the laboratories at Imperial College. I was also given the opportunity to carry out my final year project on prostate cancer under the supervision of Professor Djamgoz. I continued with my studies by studying for my Master’s in experimental oral pathology, which I then followed by reading for my PhD in the field of oral medicine at Queen Mary, University of London between 2004-2008. I became a Committee member of the “Pro-Cancer Research Fund” in 2012, after-which I participated and helped at the annual “Orchid Walk” the following year. This was an amazing experience with truly inspirational people. As I have an academic scientific background, I also assist with preparing scientific material on different types of cancer that are made readily available to the public. My academic experience outside of the PCRF involves the publication of papers in peer-reviewed journals, presenting at national and international conferences, and supervising student research projects within the field of acute and chronic oral and facial pain at King’s College London Dental Institute. I hope that I may be able to contribute somehow towards the exciting clinical trials that will hopefully be initiated by Professor Djamgoz in the near future!”

Mrs Emel Youssof: “I became involved with the Pro Cancer Research Fund through my good friend, Nesrin Nevzat; and then enthusiastically encouraged to continue being involved by my late mother, whose motto was ‘everyone has to stand and be counted and “do” things for the good’. She also became my biggest sponsor for The Orchid Walk, year after year. Not only do we raise funds for patient support but also towards the research at Imperial College, and it is this research that keeps me on board as the results will benefit all humanity (and my mother will be proud that she helped).”

Ms Ahsen Kemal (Legal Counsel): “I was first introduced to PCRF when I became unwell with Hodgkin’s Lymphoma at the age of 20. With the help of PCRF and the wonderful support network it provided I was able to overcome the disease and I have gone on to live a very happy and fulfilled life. I am currently a committee member of this wonderful charity and enjoy helping the charity make important decisions that ultimately enable others to be helped as I was.”

Mrs Nesrin Nevzat: “I became involved with PCRF at a very early stage just by anting to do good. I have become more and more committed after seeing the serious work done, both in the research and patient support. I have been on several of the Orchid Walks, often taking friends and family members along. PCRF always had a special place in my heart an always will.”

Mrs Sabire Djamgoz: “I am committed to making a difference and using my experience in caring and supporting family members who have had a cancer diagnosis. I am a psychotherapist and volunteer at the Centre helping those affected by cancer. It is one of the most rewarding things I have ever undertaken.”